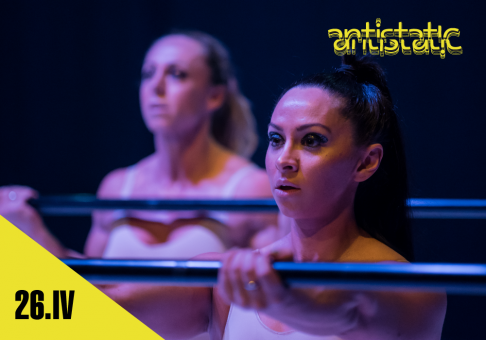 26 April / 7:30 PM / DNK – Space for Contemporary Dance and Performance
1 Bulgaria Square, National Palace of Culture – underground, opposite to the fountains

A production of Melanie Lane in Co-Production with LOFFT – DAS THEATER and HAU Hebbel am Ufer. Funded by NATIONALE PERFORMANCE NETZ (NPN) Co-Production funding dance and by the city of Leipzig, cultural department.

The guest-performance is supported by Goethe-Institut Bulgarien.

They are female professional bodybuilders. Nathalie Schmidt is a 3-times champion and Rosie Harte has participated in more than 18 events while she has studied theatre and contemporary dance and is also a singer in an electro-swing band. Choreographer Melanie Lane invites the two of them to meet in a performance context. They contemplate their highly demanding sport that amplifies and transforms the body. While striving for an ultimate physical form, the women navigate their profoundly trained bodies and the potential for a new body language. “Wonderwomen” is a dialogue that brings together strength and vulnerability, representation and transformation, athleticism and femininity.

Melanie Lane is a Javanese/Australian choreographer and performer. Her choreographic practice examines the body in negotiation with materiality, physical histories and training methods. Based in Europe from 2000–2014, Melanie worked with artists such as Arco Renz, Club Guy and Roni, and Tino Seghal performing internationally. In 2015, Melanie was appointed resident director at the Melbourne-based dance company Lucy Guerin Inc. and has created new works for Chunky Move and Sydney Dance Company. Melanie has established a repertory of works presenting in international festivals and venues such as Tanz im August, Uzes Danse Festival, Arts House Melbourne, O Espaco do Tempo, Festival Antigel, Dance Massive and HAU Hebbel am Ufer Berlin. She has been artist in residence at Dock 11 Berlin, Tanzwerkstatt Berlin and Schauspielhaus Leipzig. As a teacher, she has taught for companies such as Carte Blanche Norway, Sasha Waltz and Guests, Chunky Move, Danish Dance Theatre and Skanes Dansteater among others.

WARM UP with the audience led by Melanie Lane 6:15 PM, DNK
Free entrance.