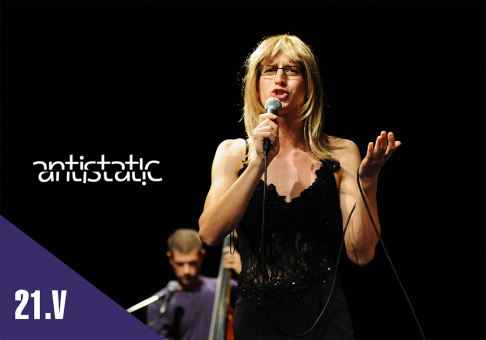 21 May / 7:30 PM / DNK – Space for Contemporary Dance and Performance
1 Bulgaria Square, National Palace of Culture – underground, opposite to the fountains

The guest-performance is supported by National Culture Fund, Bulgaria.

The title song “Tonight I celebrate my love for you” by Michael Masser and Gerry Goffin is an introduction into a series of 8 popular songs with which the singer and the performer Uroš Kaurin, accompanied  by Tomaž Grom on contrabass, expresses his love for the audience. “Today’s viewer seems to be used to almost everything. It actually seems that s/he has already seen, experienced, and consumed everything tangy the theatre had to offer. Tragic faith, live violence, nudity and sex, and similar attacks on his privileged position, he has dealt with already, and now he is only ready to enjoy theatre“, writes the Slovenian performing arts critic Blaž Lukan. Only one question remains: If the audience today is ready for everything, does this mean that a performer of today should be ready for everything too? A performance on the theatricality of the relationship between a performer and his audience, on its depth and profanity, its authenticity and illusion.

A graduate of Ljubljana Academy of Theatre and a post-graduate student at the SNDO in Amsterdam, Uroš Kaurin is an actor, dancer and performer. He has participated in several independent and experimental projects as well as in the institutional theatre. Since 2008, he has collaborated with the Slovenian experimental platform for theatre and performance Via Negativa.