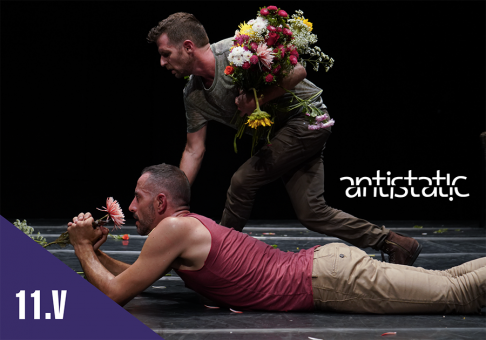 The guest-performance is supported by the Embassy of Israel in Bulgaria and by the National Culture Fund.

“The Third Dance” by Niv Sheinfeld & Oren Laor reflects upon themes of love, mortality and the need to be acknowledged. The performance touches on romanticism and its clichés – music by Mahler, flowers and a record player – but gradually uncovers a basic human need that lies beneath these cultural symbols.

“The Third Dance” is the second creation by Niv Sheinfeld & Oren Laor that is inspired by the work of the duo Liat Dror & Nir Ben Gal, who since the 1990s have shaped the face of Israeli contemporary dance and became an inspiration to a new generation of independent creators. Niv Sheinfeld danced for their company in the 90s for 6 years. A couple in life and on stage, Sheinfeld & Laor revisit “The Third Dance” by Dror & Ben Gal – a duo for a man and a woman, which became a seminal piece in Israeli dance, and contemplate on it from a contemporary stance.

Niv Sheinfeld and Oren Laor have been working together since 2004. Their works combine elements of contemporary dance, performance and physical theater.  They have been presented on major stages in Israel, such as the Israel Festival, Curtain Up, International Exposure, Tmuna Festival, etc., as well as important festivals and theaters abroad such as Montpellier Dance Festival (Montpellier, France), Tanz Im August (Berlin, Germany), The Place (London, UK), American Dance Festival (North Carolina, USA), and many others.