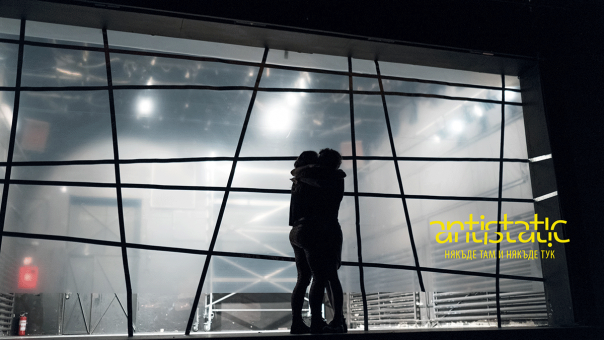 What was your starting point for creating “Out There and In Here”?

Our starting point was the drama of the awarded Croatian playwright Ivana Sajko from 2003, ‘Woman bomb’. It is written in first person, in a voice of a young woman, whose body is at the same time pregnant, carrying life, and a suicide bomber, carrying death. We think this paradoxical rhythmical stretch binding life and death, terror and sensuality, inner and outer world, fear and desire, remained the originating motor for the choreography.

How did you arrive at the visual side of  “Out There and In Here”?

We have been working closely with Igor Pauška, the stage and light designer. He proposed to close off the depth of the stage with a plastic film, blurring here and there, inside and outside. As our main focus was to dig as deep as possible into the intensities produced by the closeness and dependence of the two bodies, we let the other elements design perspective to other dimensions of this space of intensity and what it tells us about the world we live and feel in.

What makes you keep working in the field of contemporary dance and performance?

At the time of making the piece (2017), we were involved in a collective attempt of the whole dance scene of Zagreb for autonomy and transparency of the future of the only theatre in Croatia intended for presentation of contemporary dance, Zagreb Dance Centre. In this ongoing struggle for space to create and for the dignity of our profession, to let our bodies process and code all of the anxiety and anger and desperation into the dance was our space of power, freedom and joy. Getting the two awards from at the Croatian Theater Award in 2018 made us even happier exactly because of this reason. And the fight for the (right to) dance continues…