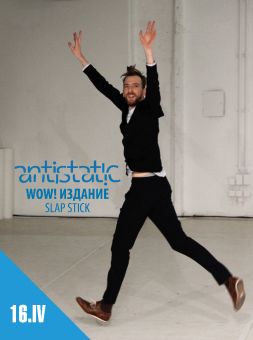 When does human body become comic and what makes us laugh at it? To what extend does the essence of the comical body point to something constituting us as humans? By definition slapstick is a popular comedian genre that relies on exaggerated physical activity beyond the rational. Using made up Brazilian dances and gestural material of several famous comedians, Hermann Heisig dives virtuously into the world of comic and the physicality of absent-mindedness, exaggeration and mechanical movement. A solo, celebrating the constant denial of efficiency and involuntary action as a motor for a journey through non­sense, naivety and ecstasy.

Hermann Heisig is an artist busy with dance and choreography, based in Berlin. In 1997 he took part for the first time in the “Best dance solo” competition at “euro scene” Festival in Leipzig. In the following years and during his studies at die Etage in Berlin he created numerous dance  solos in clubs and galleries, and collaborated with several  musicians and artists (a.o. Anja Müller, Marina Quesada, Diana Wesser, Brockdorff Klang Labor). In 2007 he participated in a seven-months program for choreography at CCN Montpellier under the direction of Mathilde Monnier and Xavier le Roy. Back in Berlin, Hermann worked as a dancer a.o. for Meg Stuart/ Damaged Goods, Thomas Lehmen, Corinna Harfouch а.о. He has presented his artistic works in Germany, Belgium, Austria, Denmark, Lebanon etc.

Warm up with the audience led by Hermann Heisig, 6:45 pm, DNA
Untypical and playful introduction into the subject and the choreography of the performance. After the warm up there will be enough time for the participants for a glass of wine before the show. Free entry.

The guest-performance is realized in partnership with DNA – Space for Contemporary Dance and “Migrating Body” Programme supported by Culture Programme of Sofia Municipality 2016. It is supported by Goethe-Institut Bulgaria and by the Governing Mayor of Berlin Office for Cultural  Affairs.