OUT THERE AND IN HERE 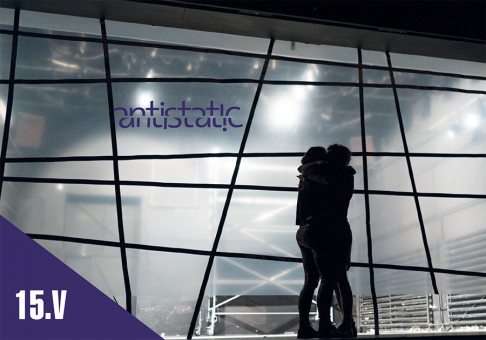 15 May / 7:30 PM / DNK – Space for Contemporary Dance and Performance
1 Bulgaria Square, National Palace of Culture – underground, opposite to the fountains

OUT THERE AND IN HERE

The project has been realized with the support of the Ministry of Culture of Republic of Croatia, and in collaboration with Perforations Festival, Theatre &TD, Student Centre of the University of Zagreb – Culture of Change and Uferstudios, Berlin.

“Out There and In Here” opens up a dense space full of potentials and treats dance as a radical meeting. This is a performance about the uncertainty that we may or may not be spared. About something, about somewhere, about maybe, about the intensity of the uncertain and the unpredictable… This performance is about the edge that separates and binds us… It is about the reasons and ways we employ to traverse it and how this crossing, one we could also call touch, changes, encourages, disturbs and instills fear… In this performance the bodies are mechanisms for production of discomfort. Ana says this performance is from what our body accumulates and lives, Sonja adds it comes from the panic you feel but do not understand, from the anxiety of the world that lives on an edge…

Ana Kreitmeyer is a dance artist and performer. She has executed her interest for the body through different practices – from performative to choreographic, from pedagogical to social. As a coauthor, she has been active within the collective BADco. since 2003, and she has developed also her own choreographic works. Since 2016, she is president of the Croatian Dancers Association. Ana is one of cofounders of Ekscena (Experimental Free Scene). She is a certified teacher of ContaKids Method.

Sonja Pregrad is a dance author, performer, and teacher. She has finished the MA  Solo/Dance/Authorship at Universität der Künste in Berlin and obtained her bachelor’s degree at ArtEZ Arnhem. Her solo works and collaborations with Willy Prager, Silvia Marchig, Marjana Krajac and many others have been performed all over Europe. She is a cofounder and co-organizer of the festival IMPROSPEKCIJE in Zagreb. Since 2011, she has been a co-organizer of an international project and an interactive dance magazine TASK with Dance Centre TALA. She performs for Meg Stuart, Boris Charmatz, Sanja Iveković, Isabelle Schad and others.

WARM UP
with the artists 6:30 PM, DNK
FREE ENTRANCE