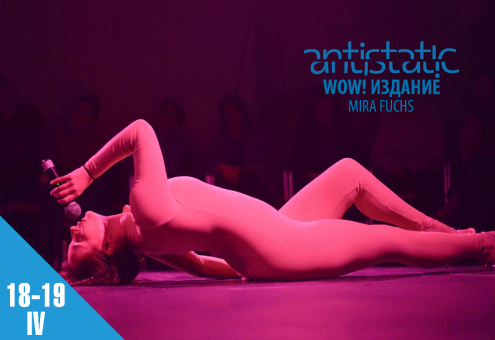 In English.
Duration: 70 min.
The performance is appropriate for audiences 18 +.

MIRA FUCHS is an expert. An expert private dancer.

MIRA FUCHS is the public face of artist Melanie Jame Wolf’s eight-year private life as a stripper. Mira wants to dance you through the myriad of questions and contradictions of this work drawing on Melanie Jame’s own experience. Structured as an essay of fragments and made for an intimate audience seated in the round, “MIRA FUCHS” proposes itself as an abstracted memoir of the body and invites audiences to critically reflect on their own ideas about stripping. Entertaining and unflinchingly personal, the piece explores ideas around gender, sexuality, pleasure, performative intimacy, the gaze and dance as labour. “In MIRA FUCHS, Melanie Jame Wolf exposes the trade of the lap dance, counts its costs, and reinvents it as an intimate gift” – Lyn Gardner, The Guardian

Melanie Jame Wolf is an Australian born artist who lives and works in Berlin now. She makes work under the name Savage Amusement, sometimes solo, sometimes with friends. This work is always performance based and increasingly incorporates video and the screen. As Savage Amusement, she has presented work in various contexts including Kiasma Museum of Contemporary Art, Helisnki; Hebbel am Ufer Theater, Berlin; Sophiensaele, Berlin; FOLA – Festival of Live Art, Melbourne a.o. She holds a Master of International Performance Research from University of Helsinki Melanie Jame is also a member of Triage. Working with this company since 2008, she presented the Green Room Award nominated one-to-one performance work a.o. Triage are currently working on the 2014-16 European Cultural Commission curatorial project HOTEL OBSCURA.

The guest-performance is supported by Goethe-Institut Bulgaria.