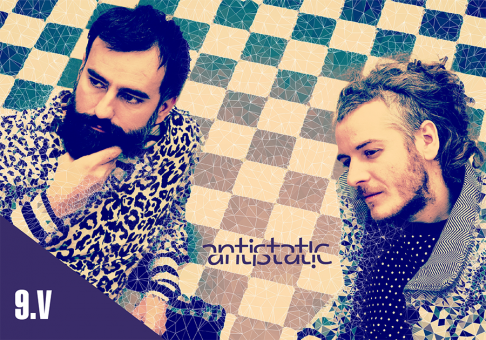 One of Eastern Europe’s most exciting musical project, “Karpov not Kasparov” began making music based on the rules and strategies of chess. It might seem complicated but the output is always a very danceable tune. There are some classical allusions and plenty of oriental flavours (because chess is an Oriental game) but always there is this powerful dance-floor bass-driven sound that makes you jump and shout. And wait! There’s more to it than just the music. Chances are you’ll see also two musicians coming from contemporary dance and visual arts. These are Eduard Gabia and Valeriu Borcos who make with music another kind of theatrical performance on the stage.

During the past five years, the duo played their very energetic live set on club or cultural stages all over Europe. Actually the band has played, in 38 out of 44 European countries!

Their debut LP “Soundtrack for a Game of Chess” has been nominated “album of the month” by Vice Magazine, declared “one of the most valuable releases of the year” by Radio Romania Cultural and Radio Europa Libera and aired online on New York radio WFMU.  Their album “The Vocal Edits” (2016) was declared Best Romanian Electronic

Release of 2016 by Scena9.ro and stamped by the media “probably the best Romanian album of its genre in the last 30 years”.

Dear friends of Antistatic Festival, “Karpov not Kasparov” will open its 12th edition with a dancefloor-friendly sound that deliciously combines hypnotic pop with eastern electro-acid.