IMPOSSIBILITY IN ITS PUREST FORM | FRAGMENTS IN MOTION 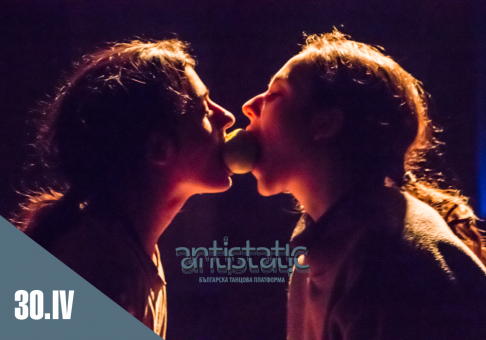 IMPOSSIBILITY IN ITS PUREST FORM | FRAGMENTS IN MOTION

“Impossibility in its purest form | Fragments in Motion” examines the impossibility as a form of hope, striving, desire and, at the same time, as weakness, vulnerability, destructiveness, impotence, unfeasibility. Fragments exist in timelessness, in an incessant feeling of déjà-vu. Dancers’ bodies are joined in structures, look for identity, build up perspectives and paint the space.

No shuttering! Where am I? When am I? In whom am I? Why am I? Are. Be. You are… Watch! Don’t sleep. Die. Pose. Spill out! Curse! Unlock! Engender!! Create yourself – fit for swallowing… Requisite.

Stefaniya Georgieva is a Sofia-based dancer and choreographer. In 2011, she graduated in Puppet Theatre from the National Academy of Theatre and Film Arts; with a group of actors she created Atom Theatre and has since worked in the area of contemporary dance. She has co-organized projects such as ATOM Choreography Series#1 and 2, 451 and 243 square meters Independent and has participated in the making of several creative spaces for independent artists in Sofia. Her work as a choreographer includes six dance pieces presented at stages, spaces and festivals in Bulgaria and abroad. She actively works with Jung In Lee from South Korea with whom she has realized a number of international projects. She participates in artist residences and training sessions and teaches dance whenever she has time to do so. In 2017, she led a class at Guildford School of Acting: GSA, UK and Vitruvian Thing in Thessaloniki. She gets inspiration from motion as design in space, collective organism as experience and site-specific body as approach.