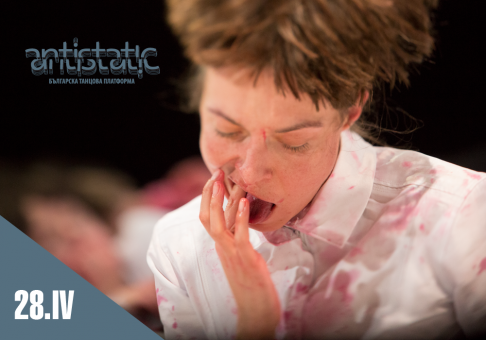 28 April/ 3:00 PM / DNK – Space for Contemporary Dance and Performance
1 Bulgaria Square, National Palace of Culture – underground, opposite to the fountains

The production is funded by Culture Program of Sofia Municipality for 2016 and by the Ministry of Culture.

With the support of Alpi Ltd. and Landmark Ltd.

“Golem” is a movement based performance that creates a minimalistic abstraction of  consumerism as a titanic centrifuge of resource – product – waste; as a monstrous driving force – emotional, sexual, market, informational… A distant starting point is the ancient Jewish myth of the hero Golem – an inanimate creature that is brought to life by man by writing magical words on paper and putting them into its mouth. A creature without its own will doomed to obediently do as ordered. “Golem” ascetically chooses the simple routine act of chewing a gum for its only means of theatrical exploration. The gum is flavoured, it is non-organic, non-recyclable and its only function is pleasure. After chewing, the gum is spitted out and thus becomes waste. “Golem” explores consumerism as a pseudo-realization of unconscious and never-ending dreams. The eternal dream for a Paradise as a circle around the trinity “emptiness – consumerism – pollution”.

“Golem” presents some of the most active performers in the Bulgarian contemporary performing arts scene. This is the third full evening piece by the director Anna Dankova. It shows original theatrical thinking orientated towards performance practices of mixed genres and forms. Dankova studied Journalism at the Sofia University as well as Film and TV Directing at New Bulgarian University. In 2002 she finished the MA Directing for Drama Theatre. She has studied and practiced various psychoanalytical and psychotherapeutic schools as her longest experience is in psychodrama.