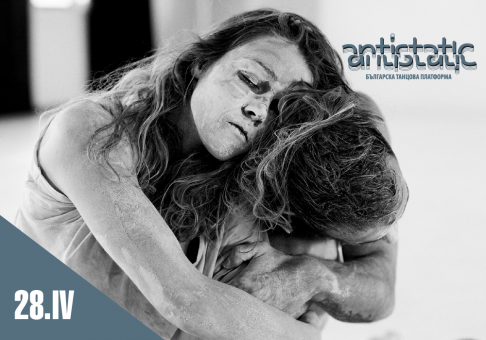 This performance is funded with the support of the Bulgarian Ministry of Culture. It is realized during Derida Dance Center’s Residency Programme, part of the Calendar of Cultural Events of Sofia Municipality for 2017. Derida Stage is supported by America for Bulgaria Foundation.

When the present disappears;
When the past becomes a shelter;
When we have hidden from the wind into a box of memories;
Whet fear OF meets desire FOR…

The title of the new performance of one of the most active contemporary Bulgarian choreographers Jivko Jelyazkov – “FLAPSƎ”, is a combination of “flaps”, the stroke of bird’s wings in flight, and “lapse”, an air current. It names a borderline state where reminiscence “carries away” body and consciousness. Performers are turned into objects, on equal terms with various artefacts from the past on their bodies. They slowly set themselves in motion engendering a world in-between sleep and reality, memory and present, atmosphere and action in the dance language typical of Jivko Jelyazkov: physically intense and at the same time theatrical. The engulfing electronic sound trace is made by his long-term collaborator, the famous composer Ivan Shopov, and performers Gergana Ilieva and Vasil Zelyamov are among the discoveries of Derida Dance Center’s educational programme Dance Port Derida.

Jivko Jelyazkov has graduated in Acting and Dance Theatre from the National Academy for Theatre and Film Arts, and has specialized in contemporary choreography at Victorian College of the Arts in Melbourne, Australia. In 2004, he founded, together with producer Atanas Maev, Derida Dance Company for which he has created more than 25 performances. In 2010, they established Derida Dance Center, a center for contemporary dance that has won recognition as a sustainable structure for training, producing and promoting contemporary dance. Jivko Jelyazkov manages its educational program Dance Port Derida and he has held also a number of workshops in Bulgaria and abroad. He won the IKAR 2017 award for contemporary dance and performance (for “S Inner”), and in 2018 ranked among the top 20 choreographers in the selection of Aerowaves, the European platform for contemporary dance for the performance “F63.9”.