TAKE DOWN & EMPTINESS AND FULLNESS 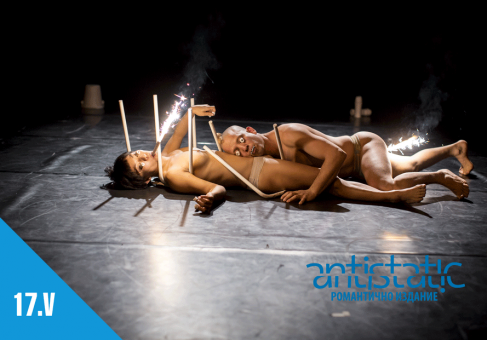 17 MAY / 7:30 PM / DNK – SPACE FOR CONTEMPORARY DANCE AND PERFORMANCE
1 BULGARIA SQUARE, NATIONAL PALACE OF CULTURE – UNDERGROUND, OPPOSITE TO THE FOUNTAINS
(warm up with the audience led by Kazuyo Shionoiri and Dror Liberman: 6:15 PM, DNK)

The guest- performances is supported by Embassy of Israel in Sofia.

„Take Down” is based on a fearless move, using charismatic movement aesthetics, that takes away the breath of the audience. The young dance artists Dror Liberman and Kazuyo Shionary perceive art as a zone for emancipation, where they can remove the mask of public hypocrisy. They turn to the evil, dark, morbid and passionate sides of human nature, trying to reach to new ways of resistance in society, in which violence becomes more common in everyday life. “Take Down” has been immediately noticed by professional critics. They write: “A pair of dancers exceptional with abilities and insights”. (Opa Brafman, “Dancetalk”)

Dror Liberman is a young Israeli contemporary dance choreographer and performer, and an active member of the Clipa visual theater collective. He studied dance and circus in Jerusalem and attended also the Haifa Contemporary Dance School. He deals with various physical practices and techniques such as martial arts, acrobatics, parkour etc. He has went also through military training and service which has marked him. Since 2013 he has cooperated with many different choreographers and has presented also his own choreographic work at important dance platforms. It is hard to relate to his works to one style or to one specific genre, as he strives to create a new language in every piece of his.

Kazuyo Shionoiri is a young Japanese contemporary dance choreographer and performer, based in Israel. She is a member of the Clipa visual theater collective. She graduated M.A from the Department of dance and sports since in the The Japan Women’s College for Physical Education (JWCPE) at 2008. Since then, as a freelancer she has cooperated with many different choreographers and she is teaching in the University in Tokyo. Within the years she got many awards for her unique promising and fresh voice as a choreographer.

A solo piece by Kazuyo Shionoiri

Kazuyo Shionory created her solo after death had broken into her house and two of her most close people died suddenly in a month. This made her look death straight in the eyes and not to be afraid of it. “I stopped looking at it as a mere personal tragedy, but as something that shapes our lives. I try to examine the world  and to leave evidence for the mark that death has left in my life.

Warm up with the audience led by Kazuyo Shionoiri and Dror Liberman: 6:15 PM, DNK