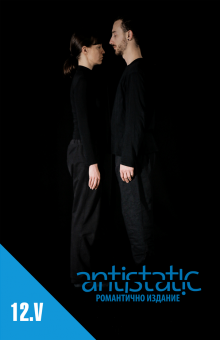 12 MAY/ 7:30 PM / DNK – SPACE FOR CONTEMPORARY DANCE AND PERFORMANCE
1 BULGARIA SQUARE, NATIONAL PALACE OF CULTURE – UNDERGROUND, OPPOSITE TO THE FOUNTAINS

The duo has set itself the purpose to oppose to the increasing conflict attitudes and fear in Europe, by giving a beautiful and positive answer. The rules of the game are clear – everyone has full freedom to perform in dance what corresponds best to his/her personality, without been restricted at all, and with constant alternation of the positions of the one who leads and the one who follows, typical for dance. The aim is a democratic and convivial atmosphere of tolerance to be created and the only ambition is respect and confidence to be as presents to our body and the other person’s body.

Brice Leroux graduated from Lyon Conservatoire. As early as his first solo performance he was distinguished as the best contemporary performer on the International Dance Competition in Paris, where he was granted The Golden Medal of Paris. In 1992 he was granted a scholarship by the American Dance Festival in North Carolina and finished training by Trisha Brown and Merce Cunningham in New York. In 1994 he moved to Brussels, where became part of the company of Anne Teresa De Keersmaeker – Rosas. Three years later he studied musicology and ethnomusicology at the Paris 8 University and continued his own career as choreographer. In his work Brice Leroux explores the boundaries between dance and visual arts. “Duo” is the latest successful collaboration of Leroux with two of the most interesting and established Bulgarian contemporary dance choreographers and performers Violeta Vitanova and Stanislav Genadiev.

The project is funded by Programme Culture of Sofia Municipality for 2017 and is realized in partnership with the National Palace of Culture and with the support of Artists-in-Residence Programme of Derida Dance Center (part of the Sofia Cultural Calendar).