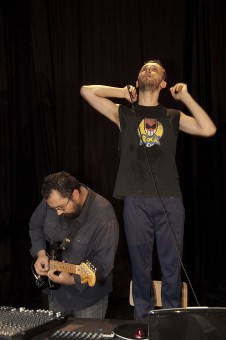 by and with Sergiu Matis and Vlaicu Golcea
a production realized by Moving Romania Festival, Potsdam

In „Duet“ the performers are surrounded by microphones, speakers, instruments and their own voice. Music becomes present and seems to take over the control over the bodies, manipulating the emotions or dictating certain atmospheres. It somehow manages to take the performer through different states and with each song, sang as one number after the other, to give him another face. The tension between the music and the performer diminishes through dance.

The guest performance is supported by Goethe-Institut in Bulgaria.