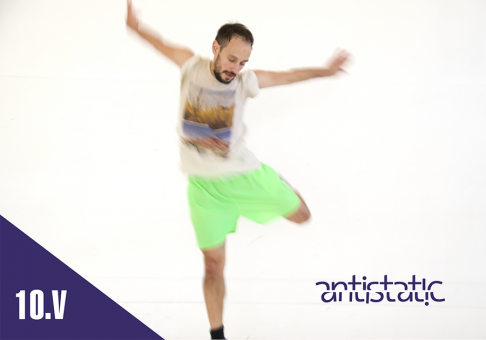 10 May/ 7:30 PM/ DNK – Space for Contemporary Dance and Performance
1 Bulgaria Square, National Palace of Culture – underground, opposite to the fountains

The performance is part of Migrating Body International programme of DNK-Space for Contemporary Dance and Performance and is presented in partnership with Anti- static Festival with the financial support of “Culture” Programme of Sofia Municipality.

“Bang Bang” is a personal – and therefore universal – contemporary ritual that allows the body to express itself at its most combative and desperate, at its most free. A present-day study about surpassing oneself, “Bang Bang” is a stage creation for a kamikaze soloist that has resistance as a theme. The work follows a score that is also an ordeal. Progressively, sweat begins to trickle, faults become alive, the intimacy of being appears in the background. The performer dances until he loses himself, until the why and the how stop making sense, until the necessity of presence has vanished. All the while, the spectators travel along through kinesthetic empathy. No narrative, only a lonesome body, immersed in the exhilaration of an ordeal in which pleasure and suffering mix together and modestly come to life in a paradoxical space. Manuel Roque’s solo both literally and figuratively questions the notion of performance, from the space of representation to the metaphors of contemporary pace of life.

Manuel Roque dances wonderfully and seems to have reached (…) an absolute mastery of his own body and a rare ability to exploit all of its possibilities. Philippe Couture, “Voir” (Montreal)

Manuel Roque started his career as a performer for leading Quebec choreographers  such as Marie Chouinard, Sylvain Émard, Daniel Léveillé a.o. Parallel to that he independently developed short choreographic forms. His first solo, “Raw-me” (2010), immediately drew the attention. Numerous invitations to a number of festivals followed as well as collaborations with other Canadian and European dance artists and collectives. Manuel Roque’s solo “Bang Bang” (2017) won the Prix du Conseil des arts et des lettres du Québec for best choreographic work of the 2016/17 season as well as the Montreal dance award for best performer.