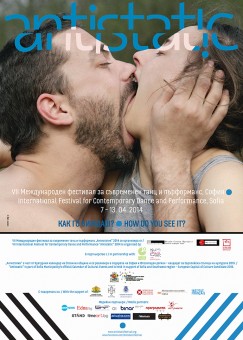 How Do You See It?

Last year we said “Profile Matters” to reaffirm the platform the Antistatic International Festival has been building for seven years now: a platform of dialogue with new ideas in authors’ uncompromising forms of contemporary dance and performance art. This year we ask: “How Do You See It?” We will share our perceptions of 8 international and Bulgarian productions that present a picture of European new dance’s present and future and develop it in different directions: as a radical physical practice (Gradinger/Schubot) or as a political dance (Farid Fairuz), raise the question about disabled body and its scenic representation  (Michael Turinsky), about the vicissitudes of authorship in art (Christine de Smedt) or about the obsession with imitation in contemporary culture (Sveshtarova/Beermann), as well as draw into an interactive artistic action about arbitrariness and freedom, spying and democracy (Informbureau/LIGNA) and more… Bulgarian dance is represented by the “TriZavisim” Project comprising three miniatures by some of the most active dance and performance artists in the country. We ask “How Do You See It?” after each event and you can seal up your opinion and talk to some of the guest artists in discussions after the performances. For true enthusiasts we have prepared, jointly with New Dramaturgies platform, a training platform called “Without Distance” that offers workshops both for nonprofessionals and professionals.

`Antistatic` stands in support of the independent scene in order to secure spaces and conditions for independent performing arts in Sofia and Bulgaria so they can be available for all of us. Thus, we organize, jointly with ACT Association for Independent Theatre, an open debate about the need of reconsideration of the policies concerning the spaces for contemporary theatre, dance and performance. For we all want to see our city as a modern, creative and truly European capital. Don’t we?