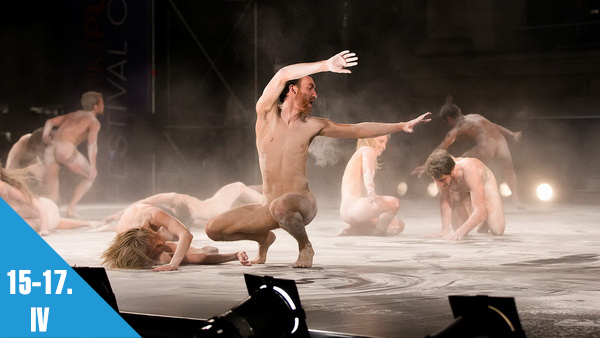 This workshop is focused on different facets of nudity, such as being-nude and getting-nude on stage. Hence we are exploring nudity not as provocation, but as a necessity for a physical research. What kind of movements are generated by the naked body, which otherwise are not possible with our clothes on? What forms of power and fragility are inherent in the naked body? What forms of representation, exhibition, public display and imagination are produced?

We will primarily work with the mass of the body, with the flesh, with body fat, with the skin and the skeleton. The meat is set in motion in different ways: it will be flying and falling, bones will implode and explode, skin surfaces will be wiggled, sweat will shine. We will stage the body without clothes – without losing the concreteness of nudity. During the workshop we will increasingly address the question of what it means for us today, in 2016 to set the naked body in motion.

“The piece “more than naked” was premiered at ImPulsTanz 2013. Let’s party our body! At the same time “more than naked” is much more than celebrating the physical materiality – which political and social motives are behind naked moving bodies? As in the piece the workshop is a very physical approach to nudity, very agitated and concrete. Our flesh wants to have fun!”– Doris Uhlich

Doris Uhlich (1977) is contemporary dance artist from Austria. She studied „Pedagogics for Contemporary Dance“ at the Conservatory of Vienna, was member of the company „theatercombinat“ 2002-2009 and since 2006 she has been creating her own projects. She was named „Remarkable Emerging Choreographer“ for 2008 by „Balletttanz“ Magazine and “Dancer Of The Year” for 2011 and 2015 by “Tanz” Magazine. 2013 she received the Austrian government’s Outstanding Artist Award. She has created more than 15 performances including Und, Spitze, More Than Enough, Rising Swan (her first solo performance, in which she plays a dying swan) a.o. She has been teaching (among others) at Tanzwerkstatt Wien, ImPulsTanz, Tanzquartier Wien, Conservatory of Vienna, Academy of Fine Arts Vienna,  k3 / Tanzplan Hamburg, Tanzhaus Zürich, Kunsthochschule Halle, Internationale Schillertage/Nationaltheater Mannheim, Theateracademy Helsinki, Beijing Fringe Festival/China, Movement Research / NYC, Love-In / Toronto, Studio 303 / Montreal. Since 2015 she has a professorship at the Max Reinhardt Seminar in Vienna (University of Music and Performing Arts).

New Dramaturgies Platform offers 4 scholarships for dance professionals from the Balkan region covering local accommodation for the period of the workshop (4 nights), participation fee and reduced tickets for the Antistatic Festival programme.

The workshop is supported by the Austrian Embassy in Sofia and is realized with the kind collaboration of Derida Dance Center, Sofia.